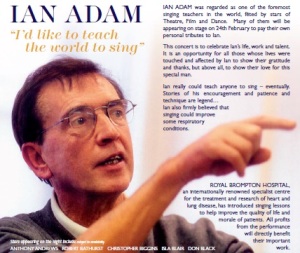 PROGRAMME ESTABLISHED AT ROYAL BROMPTON HOSPITAL IN MEMORY OF SINGING COACH IAN ADAM (click on the image for the official flyer with info on the programme and the concert held, with its full cast, in Ian Adam’s memory”).

In 2007 my singing teacher, Ian Adam, sadly passed away. “Ian was the most remarkable man and teacher. I have never met anyone who so selflessly and enthusiastically wanted to help others to become the best that they could be”.

Ian’s funeral, which I organised, was attended by many film, television and theatre stars, all of whom had also been pupils of his at one time or another. Michael Crawford, Sarah Brightman, Elaine Paige, Jeremy Irons and many many more were all in attendance.  I had the idea then that we should perhaps all get together on a London stage and do a concert to pay homage to this man who had meant so much to us. In producing the concert I managed to gather a 50 strong cast as well as succeeding in bringing together Lord Andrew Lloyd Webber and his brother Julian to perform for only the second time, at that point, in their lives.

I also worked with Royal Brompton Hospital as the proceeds of the concert would then help to establish a singing programme to help patients with respiratory problems.

The concert was a huge success and, as a result, “Singing For Breathing” was formed from the proceeds.

“Singing For Breathing” was launched in 2008 and I am very pleased to say that the project is not only still going but it has proved to have had a wonderful impact upon the health and well being of all the patients who have taken part.

Initially, its purpose was twofold, to not only teach breathing exercises through singing, in order to help patients with conditions such as cystic fibrosis, bronchiectasis, bronchitis, asthma, and other respiratory inpatients and outpatients at Royal Brompton, but to also conduct research into the impact of singing upon the patients’ health. To this end it has been a huge success. Not only have the patients expressed a marked improvement upon their breathing but it has also raised their spirits and improved their morale.

Dr Nick Hopkinson and his team, who have run two clinical trials looking at the effects of the singing training on Chronic Obstructive Pulmonary Disease, presented their findings at the American Thoracic Society Conference in 2010.

The programme has indeed proved to have been so successful that it has been extended to Harefield Hospital, to help long-term patients there with conditions affecting both heart and lungs.

BBC Radio Four broadcasted a report on the project, which also included testimony from many of the patients involved. Following the broadcast, the hospital was inundated with phone and email requests from patients of chronic respiratory conditions and from their carers, not only from just the UK but from around the world. Most enquiries were to ask how they could get their own hospital involved or how they could find a singing teacher who could help them with breathing exercises. The project featured in the Independent, the Weekly News, the Daily Express, and was also presented at events all over the UK, from the Southbank Centre’s Chorus Festival to the British Lung Foundation’s AGM.

I have seen for myself the full impact this has had on the patients involved from the many visits I have made. It has not only improved the quality of their daily lives but has also markedly affected their outlook and their faith in a future, one enhanced by easier breathing. When I first visited, the patients were certainly very restricted in their breathing capabilities, but also very nervous about being confronted by a technique which would force them to change the habits of a lifetime.

On one occasion I also attended an impromptu recital by the patients, now formed into a choir, in the foyer of the hospital. The event was as moving for the audience as it was for the members of the choir. Once they were finished, many of the choir were in tears, in absolute gratitude for what this whole programme had done for them. One patient in particular, with tears running down her face, told me of her own personal battle, in which she lost more than half of her lungs to cancer, and how she was now able to breathe again more easily.

The concert raised a staggering £48,000, which not only helped to start the programme but to see it firmly established as well.